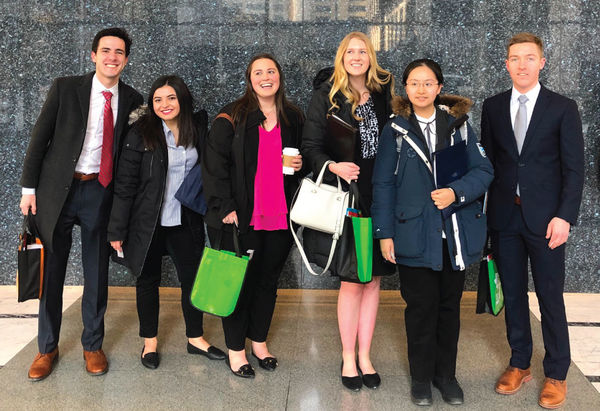 It was an exceptionally sunny day, and our group of six students were on our way to Chicago for the first Private Practice Career Trek. We all began the trek eager to learn and hungry for more information about the world of Law.

Before the day started, the only thing that I knew about K&L Gates was a fun fact; It was founded in 1883 by Bill Gate’s father in Seattle. When we got up to the office, I was immediately attracted to its modernistic environment with white walls and simplistic furniture. We were cordially greeted by attorney and Notre Dame alumna, Erinn Rigney. She then led a panel discussion with four of her colleagues, three of them current partners and K&L Gates. They each talked about their experiences from undergraduate, to law school, to career, and shared what it’s like to work for K&L Gates.

I found it interesting that the five panelists each have different focuses and very diverse backgrounds. Ms. Rigney currently works with labor market, but she shared about her past career as teacher and how this helped her develop confidence and speaking skills that have contributed to being useful in a law career. One of the partners, Clifford Histed, shared his inspiring story of how he started out as a police officer, then decided to pursue a career in law, and after a ten-year effort finally became a U.S. attorney.

When talking about having a career in law, the employees at K&L Gates stressed that “it’s never like the TV shows!” We have to be very realistic about the workload within the private law career, as the cases don’t close quickly. This is especially important for international firms such as K&L Gates, because negotiating with different cultures requires patience and communication skills. I felt I learned more about diverse career choices because all of the panelists had explored different paths before they ended up at K&L Gates. I learned from our time with K&L Gates that with all of the career options available in Private Practice it’s extremely important to have an insight into what kind of job you truly wish to do.

Our next destination was Winston & Strawn, the oldest private practice law firm in Chicago with over 160 years of history. The firm has an extensive Notre Dame Alumni network in Chicago, and many of the attorneys are “Double-Domers.” We had lunch with five ND alums in one of the organization’s courtrooms. This was a unique atmosphere consisting of our cordial conversation and the solemnity of law.

They talked much about the challenges and rewards of a career in law. For me, the most important thing I learned is to face differences. The tasks for an attorney are very unpredictable and the work mode always changes based on the clients’ personality. Sometimes, it’s especially hard to handle things because the opposite counsels can be very aggressive. Meanwhile, attorneys should learn to multi-task, such as answering the concerns from several people at the same time. One of the alums told us that she used to handle 17 tasks at the same time, which taught her a valuable lesson in prioritizing projects. They stressed that balancing work and leisure is exceptionally hard, but important too.

Beyond discussing work, they gave us some advice on how to choose a career path. Wanting to explore a career in law, I learned that it’s very important to take time to figure out what I really want to focus on, so that I have enough motivation and passion to actually “do” something.

Leaving the office of Winston & Strawn, we headed to our final destination of Jenner & Block. Jenner & Block’s office is on the 45th floor of a building located north of the river downtown Chicago. Their office has a gorgeous view of the city’s skyline, which the work environment here made me feel relaxed yet inspired. We met Samantha Glass, a ND alum who mainly talked about her experience during law school and her current work at Jenner & Block. We also met with her co-worker Regina who also shared about her law school experience. There are many reasons for a student to choose law school, yet for the two attorneys a law degree meant more than just becoming a lawyer. Samantha said, “It’s a lawyer’s responsibility to support the unprivileged.” That might be why she chose Jenner & Block, because it is one of the largest pro-bono private law firms in the country. Besides, a law degree also means the ability to think creatively and figure out how to handle difficult situations. Samantha also shared that ND Law prepared her to balance ideals and reality, even though the law school “bubble” can make students feel isolated.

Jenner & Block surprised us with one more guest speaker, Professor Daniel Murray, one of Notre Dame’s own law professors. Professor Murray has worked with Jenner & Block for 49 years and he shared some of the most interesting cases he has handled, including the Lehman Brothers bankruptcy case. Professor Murray’s speech was very inspiring, as he saw the law career as “a chance to do good more than making a living.” He also told us that it’s crucial to see different clients with equal worth, even though some people might not “deserve” it in some cases. Although different lawyers may see this issue differently, I realize that the law gives all people the same rights which are protected by lawyers.

This one-day private practice law trek in Chicago really taught me a lot, not only about the law career itself, but also how to consider making choices in life that have a deep impact my own future. I have to say, I’m intrigued even further by a career in law after listening to so many alums, because I discovered how diverse the world of law could be.