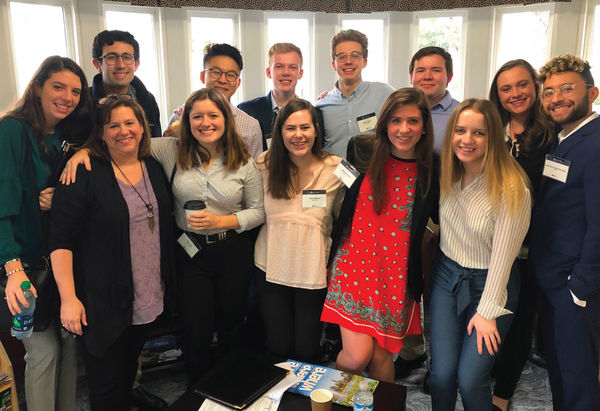 While our first day on the Hollywood Trek was jam-packed, we learned so much about the industry! At the writers’ room for Charmed, we were exposed to the process of writing a TV drama, which proved to be especially interesting since the show had to change their thirteen-episode arc to a twenty-two episode arc. After our visit with the writers of Charmed, we ventured to Disney, where we met with amazing alumni. We toured both Disney Animation Studios as well as ABC. During our tour at Disney Animation, we had the cool opportunity to see the behind-the-scenes action of our favorite cartoons. It was fascinating to learn how the animated movies we grew up with were made. We took a short walk over to the ABC studios where we had the coolest opportunity to walk on the set of Black-ish. It was so impressive learning about set design and the time crunch that comes post-pilot season.

We got back into our trusty van and drove to Nickelodeon Animation Studios. Immediately, we felt so welcome there. It was such a positive, warm environment with people who truly seemed like they were there to help us. The internship session was incredibly informative, and we were all urged to reach out for any help or support. This is something that shocked us, because the entertainment industry in LA is often portrayed as cutthroat and miserable, but everyone at Nickelodeon countered this notion. This was solidified by our tour guide, who was so amicable and willing to take us through as many parts of the studio as possible. Again we saw the hard work that goes into animation, and the labor that made up our favorite childhood shows like Spongebob Squarepants!

From Nick we went to NBC Universal, where we got to look at more sets for TV shows. Most notably, we got the amazing opportunity to walk on the set of Superstore and watch America Ferrera both act and direct. It was a dream come true for all of us. We left the set and walked over to discuss more internship opportunities with the internship coordinator. There we listened to Eric Calle, an ND alum, talk about the extremely valuable and exciting Page Program. We were presented with so many internship opportunities, and given more insight into how we should go about applying and staying in touch.truly seemed like they were there to help us. The internship session was incredibly informative, and we were all urged to reach out for any help or support. This is something that shocked us, because the entertainment industry in LA is often portrayed as cutthroat and miserable, but everyone at Nickelodeon countered this notion. This was solidified by our tour guide, who was so amicable and willing to take us through as many parts of the studio as possible. Again we saw the hard work that goes into animation, and the labor that made up our favorite childhood shows like Spongebob Squarepants!

We fit a lot in to today, but all of it was captivating and helpful. We were exposed to different parts of the entertainment industry, from writing to filming to post-production. Thus far, the most important thing that we’ve learned is the power of networking. This is something that has been reiterated in the past twenty-four hours. The Notre Dame alumni are especially interested in helping us make these connections, which give us even more reassurance and encouragement. We’re ready for DAY TWO!

FOX rocked our SOCKS off today! We started our journey with an incredible meeting with Jim Sharp. He took time out of his busy schedule to give us personalized advice, and was so willing to help us with our budding careers. From there we walked downstairs, and met with the HR Representatives. They spoke to us about the plentiful internship opportunities at FOX, which they are opening up the applications for very soon. They seem to have a really comprehensive, robust program, so it was fascinating being introduced to that. We heard from Katie Mattie, an ND alum who is in the midst of pilot season right now. She gave us so much insightful advice on how to break into the industry. Dana Sharpless also visited, and offered her expertise on how to make it in Hollywood.

For the first time during this trek, we had the opportunity to hear from the strategic business side of the industry, thanks to Vivian Kwok and her colleague Grady from the Research Department. They opened our eyes to the value of crunching the numbers and receiving feedback from audiences. After a nice lunch outside, we went to the writer’s room for Single Parents, and met with writer and alum, JJ Philbin, and the showrunner, Erin O’Malley. They provided insight into the world of writing and creating, as well as the obstacles that one might face in the writer’s room. It was enlightening hearing from two successful women in the industry about their craft. From there, we discussed changes in the industry in the light of the Fox/Disney merger, which was made official today, with Mike Dunn, another alum. His perspective was valuable, as a seasoned veteran of the industry who has been at FOX for thirty years.

Then, we learned about sound, touring the recording stage and the Foley stage. We had the opportunity to watch a Foley performer at work, which was captivating and impressive. Afterwards, we were lucky enough to drop in during the taping of the season finale of Modern Family, a show that many of us hold close to our hearts. The production assistants there were so kind, and willing to share with us their day-to-day agendas. It was a surreal experience sitting in on something so well-known and esteemed. From there, we walked around the rest of the lot, and then headed back to the hotel to freshen up for dinner. Our last stop was a networking dinner put together by Shekar, which many alumni and non-alumni alike in the industry attended. We were able to network for a short period of time before a relaxed Q&A session. It was a great way to get some concrete, realistic advice from people who know what they are talking about. Our biggest takeaway is the fact that you should be kind to everyone in the industry and you should do your job well, whatever that job may be. We are looking forward to tomorrow, and whatever it has in store for us!

This morning we had the opportunity to meet with a panel of ND alumni to discuss the creative side of the entertainment industry. To say the least, we were inspired by their words of encouragement. Patrick Creadon talked about his path from painting houses to becoming an acclaimed documentarian, while Steve McFeely detailed his writing process for writing some movies within the Marvel Cinematic Universe. Liz Lang offered her perspective of being a woman in the industry, telling us, as her dad told her, to “follow your bliss.” Young alumni, Bryan Dimas and Blake Avery, again made us realize the importance of networking and fostering connections in the business, not only to get jobs, but also to make friendships. Actor and writer, William Mapother, recommended that we check out his online platform, Slated, which connects filmmakers, “supplementing” agencies. Justin Mitchell shared his experience as a director and DP, while discussing the crucial balance between pursuing your passion and having your family. After their panel, we got the chance to freely network with them outside. It was a comfortable, fun environment, which offered us another opportunity to make connections with alumni in the field.

From there we did a 180 and ventured to one of the Big Six agencies, Paradigm. We met with two very successful agents, Pierre Brogan and  to discuss the trials and tribulation of the agency route. We learned through this the value of entering the industry through the mailroom. We also learned from their HR Representatives what they often look for in their candidates. Walking down the street, we then met with employees of Management 360. We heard from a variety of personnel from assistants to agents to creative development executives. It was interesting learning how they combine both production and management.

After a short break at the hotel we set out for the Narcos writer’s room. It was surreal sitting around the writers table eating our dinner. We then were presented with a challenge. We were paired up randomly and given two words. With those words we were expected to formulate a pitch in 30 minutes. We then presented our ideas to our young alumni. It was such a fun exercise. We finished our night honoring our head chaperone, Rose. We’re so thankful for all that she’s done to make this trip successful. We’re ending our night now preparing for our last day tomorrow. We’re so sad this is all coming to a close, it’s been such an amazing experience.

Even though today was our last day, we made sure to pack a lot in before the final hours of the trek! We first went to HBO where we talked with Jay Roewe, Senior VP at HBO, and other executives about their experiences in the industry. From our conversation with Mr. Roewe we learned that everyone’s career path is completely different, more of a maze than a straight line, and one should not be deterred by comparing themselves to others. We also talked with HR representatives about possible internship opportunities and long-term jobs at the company.

From there we took an elevator downstairs to HULU. We met with former Domer Kristen Jacobsen to talk about the marketing side of the industry. With the new merger between Disney and FOX, a few exciting changes will be happening with HULU. It was fascinating learning about the business side of things through a young alum’s eyes.

Our final event was a meeting with Sheila Hanahan Taylor, an outstanding producer and St. Mary’s grad. While we sat by the beach we had the amazing opportunity to ask her questions about her experiences in the industry, as well as advice. She gave us countless tips about how to connect with alumni, as well as how to make it in the industry by being unapologetically ourselves. She encouraged us to develop individual “brands” for ourselves, which is a way of playing to our strengths and being confident. Sheila defined her brand as being “Midwestern chatty” and the baby of a big family; because of those traits, she is very personable and outgoing, and she uses those qualities to her advantage. It was incredible hearing about her career path, from initially wanting to be an actress to meeting her current creative partner and starting a production company with him.

Our lunch with Sheila was the perfect way to end the trip, because we had all of our experience on the career trek to inspire us to ask her productive questions. It was also because she gave us the best, most tangible advice that we will certain keep in mind as we, post-trek, foster our careers even further.

One of the most fascinating things she had to say was about how every creative person has a sort of “wound” that they subconsciously attempt to resolve in their work. Sheila personally loves underdog stories, because she sympathizes with them as the youngest child who was talked over in her big family - that is precisely the wound that she has. Sheila was kind enough to hear some of our pitches for films or television shows. She listened intently to our ideas, and then provided us with helpful, concrete feedback. Not only did she critique the content of our pitches, she also advised us on how to deliver pitches in general, and what information is important to include.