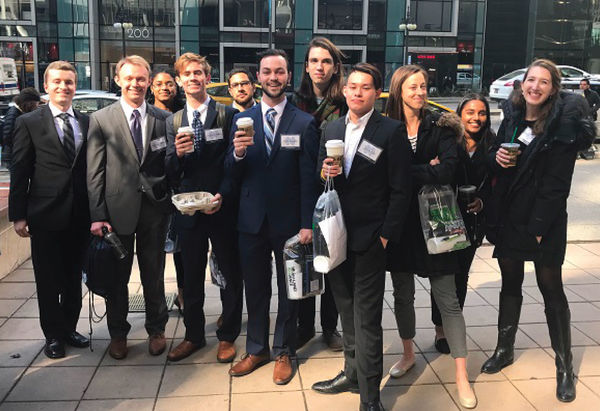 On Friday, my Business of Nonprofits class was fortunate enough to receive the opportunity to visit three nonprofits in Chicago. The different groups we visited included Heartland Alliance, the Illinois Policy Institute, and the American Cancer Society. The three nonprofits provided us a unique look into the variety of topics nonprofits can encompass, ranging from advocacy to fight poverty, working with politicians to make impactful policy change, and building communities through event facilitation and funding research in various topic areas.

Although these nonprofits vary in topic area, the similarities between the three struck me most. Particularly, the people that work at the different nonprofits are very engaged in their companies and have a strong feeling of satisfaction from the work they do. No matter the topic area, we learned that working in the nonprofit sector requires plenty of flexibility along with the ability and willingness to develop new skills and try new things. At the American Cancer Society, some of the employees we talked to described their workplace as a “team of teams.” They all have a sense of family and willingness to help each out or to give support for whatever the team may be working on, whether it is an event, working with donors, or brainstorming new ideas for fundraising.

Everyone at the different nonprofits were very professional and welcoming to us. It was clear to me that the employees were genuinely excited for us to be exploring the nonprofit sector and were thankful for the opportunity to tell us about the work they do and to answer all of our questions. One common misconception about nonprofits is that they are all grassroots kind of service, but being in the class and being able to go into these nonprofits, I now understand the variety of ways nonprofits can function. All three nonprofits very clearly took themselves seriously and were very proper. I noticed that these nonprofits very easily could have passed for private businesses when walking through the offices.

Overall, I had a wonderful day exploring the nonprofits in Chicago, and think that my classmates would agree. I am happy to have received the experience and knowledge from going into the offices talking to employees – hear what they love about their places of work, what skills and experiences they bring to the table, and to see the personal impact working in the nonprofit sector has had on each of them as well.

On March 22, the Business of non-profits class visited three non-profits in Chicago. The Career Trek was an excellent opportunity to learn about specific non-profits, but more generally, to understand the culture and themes that were similar across all the organizations.

We began at Heartland Alliance where we met with six employees who worked in various departments of the organization. While some of the panelists worked in the field, interacting with the populations they serve, others worked in the downtown office to coordinate program efforts and manage internal talent. Despite their job description, however, the panelists were united in their commitment to the organization’s mission. Their excitement about their work was made clear through their eagerness to answer our questions. As the panelists discussed their journey to Heartland Alliance, most explained how they never thought they would work in the non-profit sector. They had educational backgrounds, ranging from Chemistry to Music, yet they all found a home applying their interests and prior experiences in their work at Heartland Alliance. The panelists stressed the importance of knowing how to sell yourself, especially in job interviews. Reflecting on your experiences and being able to explain how it has led to personal growth is essential in any sector.

Our second stop was at the Illinois Policy Institute where we met with three individuals who worked on the legislative side of the policy process and were involved in direct lobbying efforts. Before visiting the Illinois Policy Institute, many of my classmates and I were wondering how a libertarian approach in a non-profit would manifest itself. After spending a short while at the institute, it was apparent that the employees were passionate about their work and were solely focused on passing their proposed policy changes. They took a much more political approach to achieve change. As we took a tour of the office space, the work environment seemed relaxed. We even got to visit the lounge and law library on the 40th floor! It was exciting to see that the Illinois Policy Institute ensured their employees didn’t burn out by offering several job perks, yet the employees were all still very engaged.

We then made our way through downtown Chicago to the American Cancer Society (ACS). The ACS offices were strikingly different than the other two non-profits we visited. The office space was much older and set up in cubicles. My classmates and I were surprised that the office was almost empty. We were later told that many employees work from home on Friday’s. We met with a panelist of employees who all seemed to have one thing in common: they all volunteered for the ACS at one point in their life. More specifically, they were all passionate about ACS’ mission. We also met with Wayne White, the Executive Vice President of the North Central Region. Mr. White started at ACS only a few months before after spending over 25 years in the for-profit tech industry. He described how non-profit work is much slower because of the reluctance to innovate. Since joining ACS, Mr. White has been committed to encouraging his employees to take risks. For example, he described how he challenged his colleagues to change their donor approach. Rather than focusing all their resources on big donors, he thought to spread resources to attract many smaller donors. Since then, ACS has been able to increase their incoming donations.

Overall, we were incredibly lucky to have been able to meet all the wonderful people we did at Heartland Alliance, Illinois Policy Institute, and the American Cancer Society. While the three organizations varied in their missions, they were united in their desire to ensure equality and equity. All of the individuals we met with bought into the values of their respective organizations and seemed excited about work every day. The work environments at the organizations harnessed a culture of collaboration and casualness, while still ensuring employee competency. Even after our long day, we were recharged by the passion we saw during the day!

This past Friday, I had the opportunity to attend a career trek in Chicago for my course, The Business of Nonprofits. We went to 3 different nonprofit organizations, Heartland Alliance, Illinois Policy Institute, and The American Cancer Society, and all three provided quality insight as to what a career in nonprofit work entails. Although all three of these organizations differed greatly, consistent themes appeared throughout the day, and I believe this was the most important information I learned.

The first reoccurring theme I learned was the importance of passion. At all three organizations, the workers displayed a great deal of passion regarding the work in which they were partaking. At Heartland Alliance, we saw the care and empathy these workers displayed regarding people who are homeless or impoverished. At Illinois Policy Institute, we saw the energy and excitement the employees showed about making policies more effective in addressing poverty. Finally, at The American Cancer Society, we heard the stories told about people affected by cancer. Thus, the employees at all three of these organizations showed their passion in very different ways. However, one thing remained the same: they were passionate about the work they were doing. This seems to be a key to succeeding in nonprofit work. The hours can be long, the work can be difficult, and the results can be disheartening; however, your passion allows you to continue to do this meaningful work despite these drawbacks. Thus, when looking for a job in this sector, I think it is very important to find one for which you are passionate.

A second major theme that arose throughout the day was the idea that we have the ability to change the world through our work. For example, The American Cancer Society has saved the lives of millions of Americans through their work. Illinois Policy Institute has created numerous policies that have passed into law, thus affecting the lives of thousands of people in their state. Finally, Heartland Alliance has given so many people a shelter in which to live or a job so that they can provide for their family. Thus, all three of these organizations have truly changed the world for the better in some way. As Mr. Paprocki said at IPI, “We are literally out here changing the world.” It seems that when organizations do not focus solely on profit and money, they are able to have an incredible impact on the world. Thus, these nonprofits are able to truly focus on helping people, and thus, they are able to change the world.

These two themes appeared throughout the day and showed the importance of nonprofit work in the world. It affects millions of people and can have a large impact on the way of the world. Thus, if we want to be able to change the world in this way, following our passion into the nonprofit sector can help us do so.