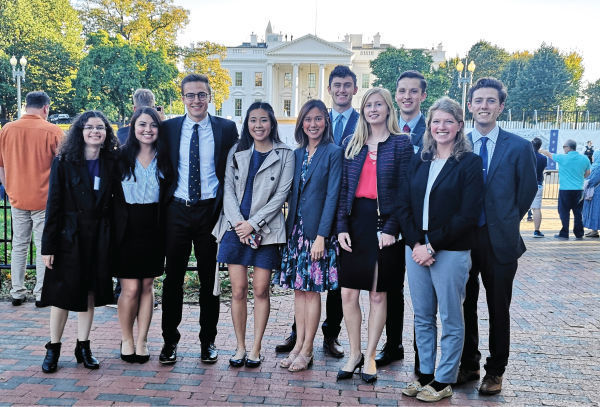 We just finished the first day of the career trek. Our group went to three companies, walked seven miles, and took more business cards than one could count.

The day started on a rough note—my roommate’s and my alarm never went off, and we were awakened by a loud pounding on the door from our guide—seven minutes after we were supposed to be ready to go. Ten minutes and two cups of coffee later, we were walking out the door of the hotel. Pumped up on adrenaline and caffeine, I prepared for the day to come on the subway using the information research we had put together before the trip.

Once our subway pulled into our station, we had a short walk to the first company of the day, Search for Common Ground, colloquially known as Search. Search is a small think tank, focused on promoting peace through discussion around the globe. Search described a change in their recent activities, switching from short-term to long-term projects in ten different regions around the world. Their projects often focused on changing social norms to promote peace in tense areas. While interesting, their projects often tended to focus on the means to an end rather than an end—and if those means were achieved the project couldn’t be a failure. While some people seemed to agree with this concept, I realized that I prefer to work in areas with defined goals that must be achieved to consider an effort a success. I understood that Search probably wasn’t the organization for my interests and goals, but the practice in networking was valuable regardless. 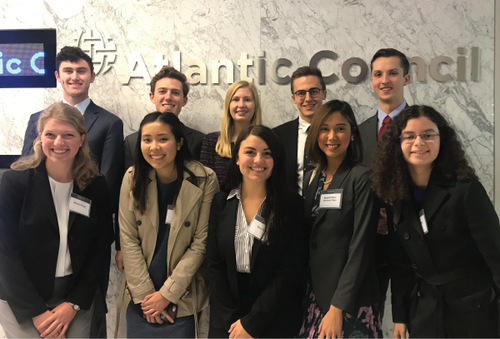 Our next stop was a short walk to Atlantic Council, a much larger think tank focused on promoting and maintaining the liberal order of diplomacy and international relations. Atlantic Council seemed much more established in the Washington order than Search and they were substantially more formal. Atlantic Council brought in six people for a panel: four interns and two permanent employees. These people worked in foreign policy in a variety of areas and each brought their own perspective to the table. By this point I felt much more comfortable in sticking my neck out and asked two questions. Atlantic Council was very helpful in job discernment questions—they gave us a great idea of what qualities they, and other Washington organizations, were looking for in an intern or an employee. I found this comforting because too often employers can’t elaborate what they are looking for, and it shows disorganization. It was clear Atlantic Council was organized and professional, and I appreciated that very much.

After our lunch, the last stop of the day was Avascent, a small consulting firm primarily oriented towards military and aviation. Avascent described the various consulting duties they perform, and briefly ran us through a sample case study that they performed. Avascent was my favorite stop of the day, because they brought in Notre Dame grads to talk with us, and were very open and casual, while remaining professional and on-topic. No one ever explained to me what consulting really was before, and I found it to be interesting. I found it interesting how their employees described the necessity for some quantitative skills combined with communication skills to express outcomes to a client. As someone who finds both of these skills valuable, it was refreshing to see an organization with interesting work expressing those very same values. Today was a very good beginning despite the rocky start. I’m significantly more comfortable with networking and talking with employers than I was 24 hours ago. I’m very much looking forward to tomorrow. 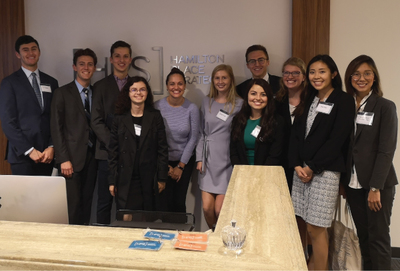 Today was probably the longest day of the career trek: over 14 hours of networking and touring. We started with an early morning departure—and I got up in time for it today. Four organizations, a lunch, and a networking dinner later, the day is complete. We started the day by going to Chemonics, followed by the Leadership Conference for Civil and Human Rights, Hamilton Place Strategies, and the State Department. In addition to it being the longest day of the trek, it was also the most essential for my internship prospects: I went into the day with interest in all four organizations, and came out with my interest much more defined and concentrated. Chemonics was an interesting organization, focused on international development. They put together a panel of four Notre Dame alums to tell us about Chemonics—it was clear the Notre Dame connection was strong. I found the panel informative about the goals of international development, but unfortunately the information dampened my excitement in the field. The past days have solidified my interests, and one of those interests is genuine competition. The idea of receiving grant donations to research and implement solutions abroad wasn’t an appealing idea to me, but some really seemed to enjoy it. Despite losing interest, I was thankful for the experience.

The second stop of the day was the Leadership Conference for Civil and Human Rights, a coalition of advocacy groups like the NAACP and the ACLU. This outcome was the exact opposite of Chemonics—I held a little interest prior to the visit, and exited with strong interest. Their message of advocating for marginalized groups was extremely appealing, and I think it would look great on a law school application. The people there were passionate about their work, and it was important work. After a quick lunch, we went to Hamilton Place Strategies, a finance and tech consulting firm that I was very impressed with. Before this trek, consulting wasn’t even on my radar, but after visiting two small firs, I could see myself working in the industry before law school. HPS was great because they emphasized a horizontal structure—the managers, analysts, and consultants all worked together to solve problems, rather than a top-down or bottom-up organization. Everyone there seemed glad to be there—the work environment appeared to be fantastic. There was a lot of young professionals, which made it very easy to see myself working there, or another firm similar to it. 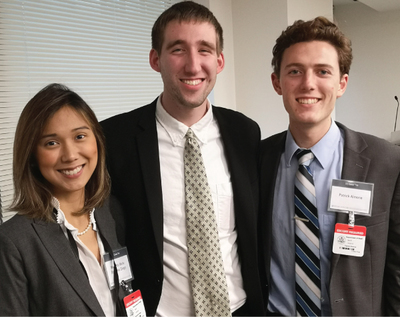 The fourth stop was the US State Department, where we met with a former valedictorian of Notre Dame. One thing that was intriguing was the discussion for the Foreign Service, a branch of State that works in embassies abroad. I would be able to do this for a few years in between college and law school, and gain tangible, real-world experience. It sounded like an interesting job for a young person, I plan to look into it more. The final activity of the day was a networking dinner at the Keough School, where I was able to talk to recent alumni, particularly those in the field of law. This was my most productive part of the day—I made five new connections, all of whom I plan to follow up with in the next week about possible internship opportunities. I ended the day feeling quite productive.

Our third day was a short one, but no less interesting. We went to two organizations: The Refugee Processing Center and Facebook and spent about 90 minutes at each. We left the hotel a little early to take the Metro to the Refugee Processing Center, where we met with a manager and several interns. They described the duties of the Center and their own job responsibilities, as well as detailing some of their recent struggles to operate amid the political climate. I found their corporation interesting because I realized that there are so many government organizations behind the scenes, doing the work that we take for granted. The Center is never credited publicly for its behind-the scenes work. While I found the Center’s mission interesting, it was difficult to see myself working there. However, it did inspire me to look into other government organizations that may not be as prominent, and I suspect these may be of greater interest to me. 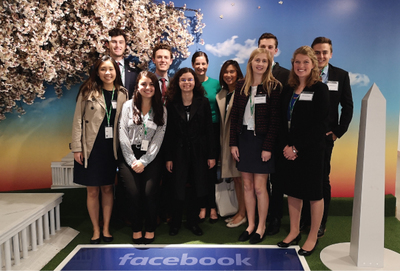 The second stop of the day was far more interesting—Facebook was perhaps the surprise of the week. As a student studying national security, I was suspect of Facebook going in. However, the ND alum we met with made a compelling case for working there, describing the ideals of free speech that she gets to advocate for on a daily basis. When I asked her about a conflict between moral ideals and profit motive, she responded that the two almost never conflict because Facebook believes that it can achieve long-term profit by following its ideals right now. That was the answer I was hoping to hear and it put me at ease. While I remain unsure about applying for jobs at Facebook the meeting at least opened the door for that possibility. 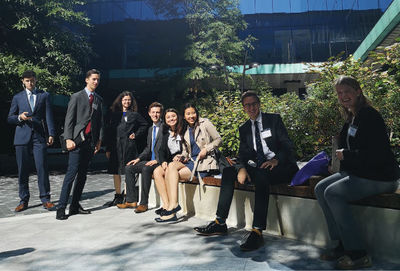 As the career trek has ended, I figure I should share some of the major takeaways I gained from the trip. Firstly, every single employer is looking for writers that can take large amounts of information and summarize it in under two pages. The long college-style papers aren’t very important in the business world. Secondly, employers want to see a strong and clear sense of why you’d like to work there. One employer summarized it best: “You should be able to elaborate where you’re coming from, where you’d like to go, and how this position fits in between.” Thirdly, your first job will certainly not be your last, and therefore it doesn’t need to be your dream job. You should find a job that you can be passionate about and develop skills that will be essential for that dream job. Some companies value loyalty, but others place less emphasis on that—working at a company for two years and leaving is not necessarily frowned upon. Finally, you should never meet with a contact without having another connection to build upon. Metaphorically, networking is not a field of grass where you have many contacts, unconnected to each other. Networking is a shrub where contacts are intertwined and one builds off of another. Some contacts are for information and clarification, some are for getting a job or an internship. Washington is a place where your most important attribute is who you know—and your networking ought to reflect that.