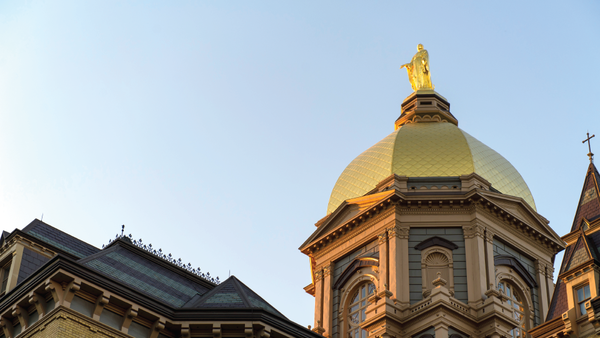 Athletics have always been a big part of the culture at Notre Dame. But for many student athletes, sports have been their whole life, and they aren’t sure how to transition from playing their sport in college to what they will do after graduation. Many students don’t even know how to find the time while juggling practice and school to pursue what options they want to explore.

James Biddick, the Student-Athlete Career Development Program Manager for the Meruelo Family Center for Career Development (CCD), has faced these challenges while serving Notre Dame student athletes in the three years he has been working in the CCD. “The student athlete and student-manager population is always pressed for time,” he explained. “There are 20+ different teams operating on 20+ different schedules. You really have to work team by team.”

The solution to these problems? A 1-credit course tailored and designed by Biddick specifically to aid student athletes and student-managers with their discernment and career goals. Biddick believed a class would be the best way to cut through all these obstacles. “If it’s on the books rather than just an optional thing, Notre Dame students will be more likely to be able to do it,” he realized. “And this would also circumvent the challenge of catering to each team’s individual schedule.”

But there are many steps to take to turn an idea into an actual class, Biddick quickly found out. “It took a while,” he said with a laugh. The first thing he discerned was that someone needed to “own” the class; it had to have a home in one of Notre Dame’s colleges. Once he decided the College of Arts and Letters was probably the best place for it, he "was then kind of pinballed to four or five different people across the University to sign off on it,” Biddick explained. And all of a sudden, it was official. The “Life Beyond Athletics'' class was born.

The next step was to identify students who had a desire to take the class. The annual career-focused student athlete survey was distributed to gauge interest. The survey results were not only used to drive conversation during each student-athlete’s annual one-on-one career-check-in with Biddick; but they also highlighted that the majority of student athletes wanted to engage with the CCD, and with career-focused experiential learning opportunities, but faced significant barriers. The survey showed that 41% of student athletes had previously used the CCD, and 90% had a desire to use it in the future; with 90% noting there was a barrier (lack of free time being the most common) which prevented them from engaging. Biddick then hand-selected 21 students based on their interest, availability, suitability and need for the course.

“The main goal of the class is that I want them [student athletes] to understand the journey that they’re on and where they may be along that journey,” Biddick explained. “Many of them haven’t thought a lot about life beyond Notre Dame because they’ve been so busy with their sport. It’s a massive part of their identity, so trying to work out who they are beyond their sport is a big thing for them.” The course focuses on giving student athletes the skills and experience to figure out where they are on their career journey, who they are, and where they want to be.

The class begins with an Initial Reflection, around twenty questions to gain an understanding of where these students are in their career development. At the end of the course there is a Final Reflection, with the exact same questions. This semester, almost every student showcased a significant increase in confidence, understanding and engagement after they completed the class.

The class aims to be very experienced-focused and consists of check-ins with CCD Discernment and Industry counselors, Mock Interviews, Informational Interviews with former student-athletes and alumni, a variety of guest speakers and a speed networking event. Biddick also noted that each student will come out of it with something tangible, including a resume, LinkedIn page and Handshake profile. Building these documents and profiles are also a main focus of the course.

Student response has been overwhelmingly positive. “I think I’m light years ahead of where I was before I took this class,” stated sophomore Sarah Boyle, a member of the Notre Dame women’s swim team. “The biggest thing for me was that this class allowed me to set aside time to focus on myself and my future career.”

“My ultimate big picture goal for the course is that eventually every student athlete will be able to complete the class when they feel the timing is right for them,” Biddick noted. He hopes it can be offered in the fall, spring, and summer semesters to accommodate every athlete’s season. “Particularly with Name, Image & Likeness coming at us, I think such a class is more important now than ever.”

“He [Biddick] gave us a lot of time to focus on ourselves, and so many great resources and tools to help us with our discernment,” Boyle added. “As an athlete, much of my identity has always felt tied to my sport, so it was great for me to start figuring out who I am beyond just being a swimmer.”