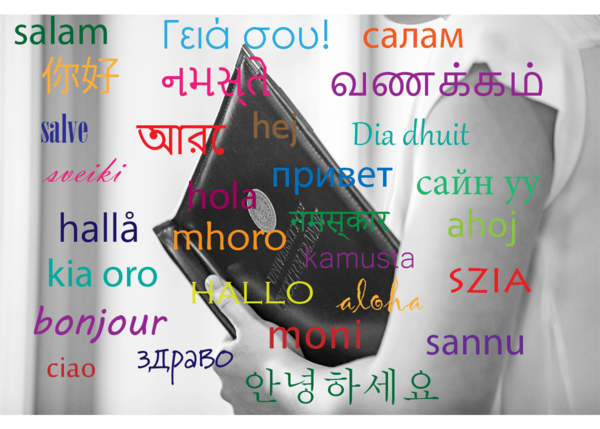 Knowing another language has a variety of advantages in the professional world. According to a 2017 study by the New American Economy Research Fund, demand for bilingual workers more than doubled from 2010 to 2015. No matter the language, being bilingual is a sought after skill among prospective employers. It can help make a job candidate more highly desired, provide salary advantages, and can even shape a person into a better colleague. The amount of jobs available is dependent on the languages that are in demand.

There’s often a misconception of limited career trajectory when pursuing language as a professional career. Beyond a translator, interpreter, or a language teacher, there are several ways to use language effectively, especially in customer-focused industries like advertising, marketing, education, publishing, tourism, nonprofit and government work, advocacy, and healthcare. Monica Laidig, advisor for the Student International Business Council (SIBC) at Notre Dame, advises, “Every company is a global company. Bilingual employees are heavily in demand in many industries, including those that conduct business with non-English speaking consumers or organizations.” Laidig encourages students to see that opportunities are everywhere. “Even if a company doesn’t have offices or businesses located outside of the country, everyone is working together and intersecting with other cultures, other languages, and other countries.”

Maggie Mello, Assistant Director of the Center for the Study of Languages and Cultures (CSLC) at Notre Dame, notes that jobs in administration, especially in universities, often use foreign language. “A lot of people at Notre Dame International have language backgrounds, and it shapes how they interact with people.”

Another area with endless possibilities lies within the government. The public sector, including federal, state, and local government, accounts for between 10% and 25% of each U.S. state’s workforce.  Lisa Oglesbee, Assistant Teaching Professor of English for Academic Purposes at Notre Dame, states, “Many government bodies throughout the United States work with people who don’t speak English.” Some employers in government also provide hiring bonuses and language maintenance pay.

Speaking another language also gives an edge in the hiring process. It adds another dimension to your application and shows the ability to achieve difficult goals through attention to detail and continuous effort. Laidig points out that for Notre Dame students, being bilingual or multilingual is a rare and valuable skill. “It’s a small percentage of people,” she says, “so you’re in an elite group in terms of having both a great education and being bilingual.” She encourages students who speak multiple languages to highlight their language skills on their resume. Studies have shown that bilingual employees perform better on a multitude of tasks, including those that test memory, problem-solving skills, and attention - all skills that are highly desired by employers.  “That’s one of the things that helps someone stand out when competing for jobs with other candidates that don’t speak a second language.” Laidig emphasized, “The most useful language is the one you are passionate about learning. Getting to a level of fluency would be an incredible benefit in any language.”

In an environment where teamwork and collaboration is key, the ability to empathize with others is a valuable skill. “Father Hesburgh was a family friend, and he was multilingual,” says Laidig. “He always said if he could go back and do anything over, he would have learned another language earlier.”Learning another language lets you see the world from others’ perspectives. “It gives you the ability to connect with people you wouldn’t be able to connect with otherwise,” Oglesbee adds. “Interacting with people, fostering a wider world view, understanding the world better - it all makes you a better colleague.”

Learning another language also improves multicultural competency, a key skill in today’s globalized market. This multiculturalism and multilingualism can lead to a global career, as speaking other languages naturally opens the door. “If you are hired by a company that has positions in other countries, you might be a favored candidate to be assigned to those projects,” Laidig says. “As the world is changing, speaking another language could give you a lot of advantages down the line.”

The Center for the Study of Languages and Cultures offers many resources to students, including free peer tutoring for 16 languages, weekly or monthly language discussion tables, language-learning workshops, lectures, and more! You can also take one of Notre Dame’s many language classes offered through the College of Arts and Letters.

In addition, the Flatley Center for Undergraduate Scholarly Engagement helps Notre Dame students apply for many international and language-related opportunities, including the Critical Language Scholarship, which funds a summer of international language immersion.

Notre Dame students, alumni, faculty, and staff also have access to Mango Languages, an online language learning platform that offers support for over 70 languages. There are a plethora of other platforms to choose from on the Internet, including Duolingo, iTalki, LingQ, FluentU, and more, though Mango Languages is a wonderful (and free!) resource for Notre Dame students.